Mom and Lyn took Lyn's former manager from Wendy's out for a picnic at one of their favorite spots.  They visited Quarai out near Mountaineer.

When they arrived, they were very surprised to se a work crew and a large truck handling tables and lighting for a special event.  Not wanting to get in the way of the work, they checked with the park ranger who assured them they could use the picnic tables and enjoy the monument.

The crew was taking everything down and the special event, a wedding, had happened the previous night.  Lyn was very entertained by watching the men and was able to learn that lights had been installed in the cotton wood trees, spotlighting the ruins.  They had also lined the paths with luminarias so the guests could stroll the paths which are normally not lit after dark.  It is a beautiful location and I'm sure the event the night before was lovely.

After they lunched, Lyn led Mom and her former manager along the paths.  Lyn was happy.  She had two of her favorite people at hand and was the center of attention. 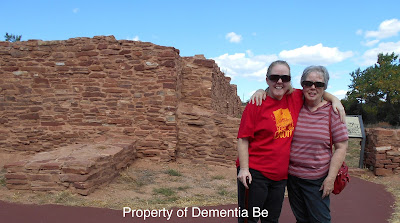 They were able to be home in the afternoon while the light was still strong.  Lyn was exhausted but content.  It was a good day and Nikka was waiting for her.
Email Post
Labels: A Good Day