This weekend, Lyn's respite provider took her to the Christmas Corral hosted by the Galloping Grace Youth Ranch.  They were not looking to buy a Christmas Tree.  Mom already has one.  However, they were attracted by the giant candy canes and Santa's village set up.  Mom had seen the Christmas Corral advertised in the paper and Lyn wanted to go.

It was opening day and the Corral was fully prepared for their visitors.  It may be an early start to the Chistmas season this year because of an early Thanksgiving, but that wasn't stopping anyone; least of all Lyn.  She was thrilled that she got to see Santa. 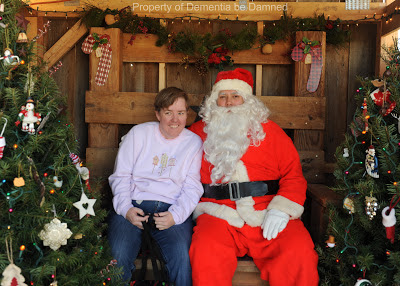 She spoke to him and told him what all she wants.  She doesn't remember what she told him and that's OK.  Just look at how happy she is to be sitting next to the jolly old guy.

The staff took this picture of Lyn and sent a business card home with her.  On the back, they wrote that they had this picture and one other.  If Mom wanted them, they would be happy to email them to her.  Mom wasted no time in sending them an email, thanking them for their kindness.  They followed through and sent the pictures.  This made Mom's day.  Unfortunately, it is not often that complete strangers take a moment to be so generous with their time.  We greatly appreciate any kindness shared with Lyn.

Seeing Santa made Lyn's week.  She's been telling Mom about it repeatedly.  She even made Mom promise to take her back again.

It was an early visit between Lyn and the elf.  It probably won't be the last this year, either.  That won't matter to Lyn.  She'll greet each Santa she sees with the same love, excitement and belief as she does the one before.  She's never lost that and I love her for it.
Email Post
Labels: A Good Day She makes me laugh