Blue was a horse that our Uncle owned for many years. 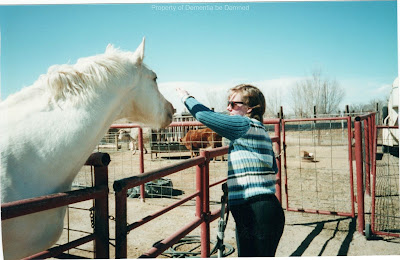 Blue was a gentle horse.  He was a great horse to ride if you were a young.  He was gentle and very responsive to children.  If an adult was on his back, he tended to act up by pulling on the reins or trying to go where he wanted.  Our Uncle had a quarter horse named Tabby who was the exact opposite.

Blue was one of the horses that our Uncle has allowed Lyn to ride over the years.  Lyne's ride with our uncle usually would involve a couple of circles around his property.  Our uncle didn't like to take Lyn out on the trail along the ditch.  I think it was more about his comfort level in protecting her than in her level of comfort on the horse.

Blue was a character who gave many rides to the kids in the family.
Email Post
Labels: A Good Day Memories