Lyn has been on the go this week.  In addition to day hab, she had her regular bowling afternoon and did quite well. 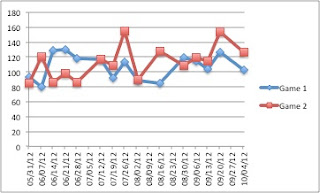 During one of the day hab activities they decided to go bowl a single game.  They hadn't really planned it in advance and Lyn wasn't prepared with her own ball or shoes.  She was angry and did poorly.  It was the first time one o the other day hab attendees had beaten her.  He was elated!

The weekend ended up being busy as well.  The International Balloon Fiesta has started and she's been able to see the mass launch on Sunday.  (Saturday's was scrubbed due to weather.)  She will be attending the special shapes balloon glow later in the fiesta.

Lyn, Mom and their lovely neighbor also attended two craft shows.  Lyn had hinted that should anyone want to go out to lunch, she had two $5 bills and a couple of $1 bills and could pay for herself.  She's subtle like that.  They went out to lunch and she was very happy.
Email Post
Labels: A Good Day