Over 10 years ago, my side of the family had a falling out with another member of the extended family.  As with all such events, at this point, laying blame is irrelevant as both sides of the disagreement bear responsibility for the current state of relations or lack thereof.  The interesting thing in this tale of familial strife is not that it occurred, but that Lyn is currently mourning it.

Earlier this week, as Mom and Lyn got into the car to head out to day hab, Lyn withdrew into herself and became quiet and unwilling to talk.  As they approached the freeway, she was on the verge of tears and was not responding to Mom's attempts to get her to focus on how happy she had been just moments before while playing with Nikka.  She eventually blurted out that she misses members of the above mentioned relative's family. 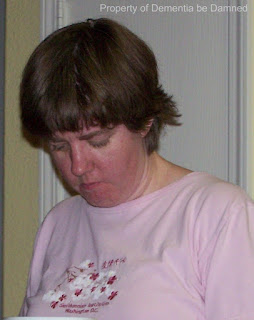 Now, there was nothing in the morning that brought up this part of our family.  So what caused this?  Based off what we know of memories, something in her brain stimulated the neural pathways that store the memories that evoked the emotional response Mom witnessed.  Your guess is as good as mine as to what triggered it.  In all honesty, I don't always know why a particular memory, good or bad, will pop to the forefront of my thoughts and evoke an emotional response.  The difference here, however, is significant to me.

As individuals with dementia experience more and more loss of neural pathways which have been laid down more recently, they begin to exist in a time of their life which has already passed.  For example, my husband's grandmother had Alzheimer's for over a decade before she passed.  As each year of her disease progressed, her memories of her life seemed to go backwards.  For her, the life experiences she could recall  corresponded to different times in her life.  At one point, she could only recall the first 30 years of her life.  At a later time, she could only remember the first 15 years of her life and so on.

This is what I believe is happening to my sister.  She is grieving an event that happened a decade ago as though it was fresh and just happened this week.  In a way, I hope she is not stuck here for long.  For another person, that would mean that they would move beyond and set the conflict aside.  For my sister, I recognize that what I'm saying means that she may just be loosing the neural pathways that remember this event.  It is a double-edged sword in this case.  I don't want to see my sister upset and know that may mean I'm hoping this particular bit is quickly lost.

Additional Information:
How to Respond to Someone with Alzheimer's Who's Crying
Email Post
Labels: A Mixed Day Changes My Thoughts