When Lyn was learning to feed herself, she would hold her spoon or fork in her right hand.  She knew she was supposed to hold the utensil.  The utensil just wasn't of much use to her.  So, she held it while she used her left hand to scoop up a heaping handful to shove into her mouth.  This is a very messy method by which to feed yourself, but it worked. 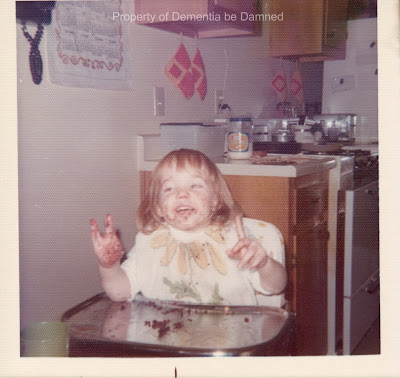 Notice that the right hand is nearly spotless while the left is a mess.

The picture above was from our brother's birthday.  Chocolate cake was obviously a big hit as it was a few months later (below). 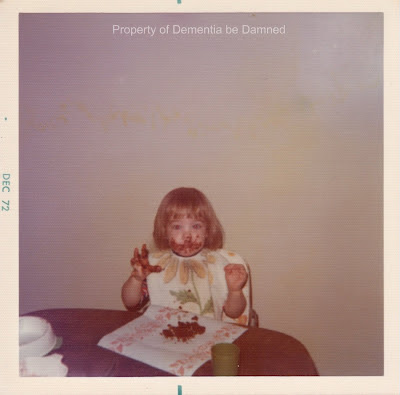 At the time of these pictures, our father was stationed with the Army in Alabama and guys from the base knew that Mom kept an open door and an extra plate at the table.  Most evenings, there was an extra guy or two from base over for dinner.

Lyn loves spaghetti.  She did then too.  Feeding herself spaghetti was an adventure which frequently grossed out most of the adults who witnessed it.  She'd hold the utensil in one hand and shovel with the left.  Spaghetti sauce would over her pretty evenly.  Noodles would be mixed in with her hair and hanging out of her nose.  It was a mess!  But she did it herself.


1/20/2012 Update:  I cannot tell my right from my left sometimes.  Mom kindly pointed out that Lyn's LEFT hand is spotless and her right hand is covered in cake in both photos.  Lyn is left-handed.  However, at this time, she fed herself with her right hand because she was holding the utensil in her left hand.
Email Post
Labels: Memories