It is Not Fair

I was chatting with a friend from work who has started reading this blog.  She knew I had a sister who was intellectually disabled.  She didn't know about the dementia diagnosis or the blog until recently.  She's been reading the blog from the first entry to today's and getting caught up to date.  I am thrilled to learn that she's been moved by my posts and greatly appreciate the feedback.

As we spoke, she declared "It is not fair (that Lyn has dementia)!"  I agree it is not.  However, what in life is supposed to be fair?  Some may counter such a declaration with assurances that God would never give us more than we could handle.  I, personally, am not so quick to make such attributions

This is where my belief that we underestimate ourselves comes into play.  Does God give us only what we can handle?  I don't know.  What I do know, however, is that I will never know my limits until I put in the effort and push myself.  I can sabotage myself by saying "I can't deal with this" or "It is beyond me."  What good does that do?

Mom never told Lyn she didn't have the ability to do something.  We didn't know if Lyn could do something until we let her learn and apply herself.  Some of the things that Lyn has achieved in her lifetime include: 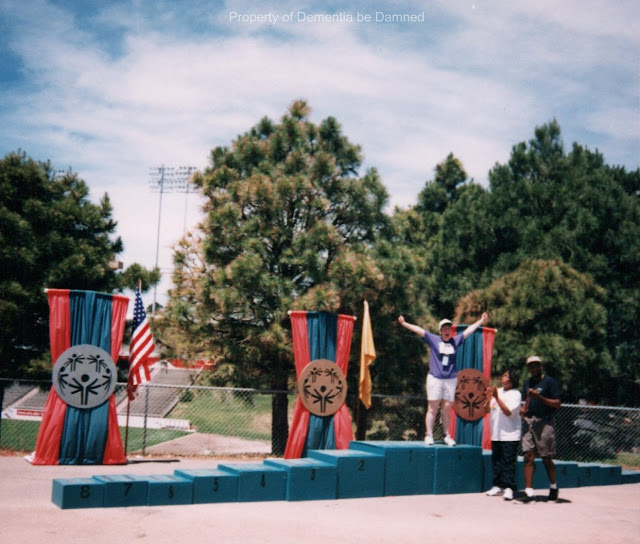 Based on just her IQ, some of these things should not have been possible.  Since the dementia, some of those skills have been lost.  They would never have happened if we allowed ourselves or allowed Lyn to underestimate her abilities.  Maybe learning to do your own laundry or learning how to navigate the bus system seem like small tasks to us, but they were challenges for Lyn that she conquered.  That was the model under which I grew up.

As a mom and a foster mom, I see this again in the children in my life.  They have their issues, as do we all.  I have seen a child who was kept in a car seat for 8 months, who couldn't even sit up on her own, learn to roll over, to sit up and to stand with assistance and support her own weight in two weeks when given the chance to push herself.  I have seen a child with PTSD learn to trust and to love.  No, life is not fair; but we always have a choice.  We can choose to accept the challenge in front of us or not.  Lyn's accepted many such challenges so I will to.

As Mom pointed out on numerous occasions when our teenage drama would cause us to spout "It is not fair!" over some perceived slight from the universe in general or from her specifically: "Show me where on your birth certificate that it says life is going to be fair."  It doesn't.  My birth certificate definitely has no such guarantee.  I suspect that Lyn's doesn't either.  Hers is in Italian which I don't read.  However, I am pretty sure a translation of her birth certificate would not reveal that life is supposed to treat her fairly either.
Email Post
Labels: Memories My Thoughts