Grandma was the person to successfully teach Lyn to ride a bike.

She had an old blue bike with a big cushy seat.  There were no training wheels and Lyn was probably much too big to use them anyway.  Grandma figured that she could just hold onto the back fender of the bicycle to steady it while Lyn learned to ride.

They decided that the road out front of Grandma's house was too rough and covered in loose gravel to make a good learning surface.  So, that meant that they would use the well-worn from from Grandpa's workshop down to the well at the back of the property.  It wasn't a long distance, but it was smooth.  The entire property was only 1/2 and acre in area and the distance between the points is less than 1/2 the length of the overall property.  The well is the white square in the upper right corner of the picture below. 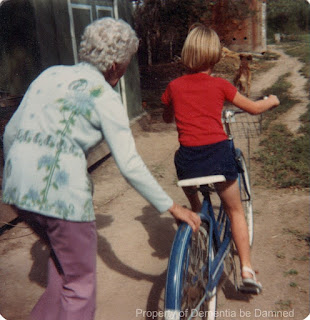 It wasn't that no one had ever tried to teach Lyn to ride a bicycle before.  They had tried many times before.  I think it was just that previous attempts didn't quite click for her.  We've seen this numerous times over the years.  You can work and work and work with her on a task with no progress being made.  Then, one day, someone else tries something and the light goes on and the task is now done with ease.  The same thing happened when she learned to tie her shoes.

That's a story for another day.
Email Post
Labels: Memories