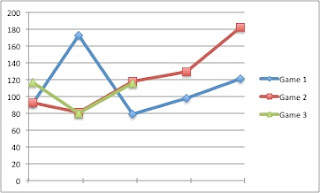 Now, the story.
The guy who paid for the athletes' bowling came down to where Lyn was sitting.  Without announcing himself or greeting her in any way, he came up behind her and put both arms around her.  He frightened her.  Lyn's respite provider was right there and loudly said "Hey!  Hey!  Hey!  What the hell are you doing?"  He let go and Lyn rushed over to her provider.  He said he just wanted to wish her luck and was told to tell her by keeping his hands to himself in reply.
Later, he came up & told the coaches he now would like to take everyone to the movies.  Both Mom and Lyn's respite provider have alarm bells going off now because of his actions.  He has spoken to Lyn once before.  However, that doesn't give him the right to touch her, especially without her permission.
When Lyn got home that afternoon, she had to be repeatedly assured that she did nothing wrong.  She didn't like him hugging her or coming up on her from behind.  Mom coached her on yelling "No!" really loud if he touches her again but suspects Lyn will just freeze again.  Mom reiterated that no one has the right to hug someone when it is not wanted.
Fortunately, Lyn's never out in public unattended.  Her respite provider is very protective of her.  She alerted the team coaches to the man's actions towards Lyn but they didn't react.  Unfortunately, there are some coaches and care providers who believe that as long as they can see what is going on, then everything is OK.  They would not have intervened the way Lyn's provider did this week.
Some would argue that it is a tough decision.  Lyn's legally an adult and can choose to hug someone if she wants.  We agree to a certain extent.  In this situation, Lyn didn't make a choice.  It was forced upon her unexpectedly.  I don't care if you're intellectually disabled or not, that's not acceptable.
And to Lyn's respite provider, Thank you!  I appreciate knowing you're looking out for her.
Email Post
Labels: A Challenging Day Bowling