For several years, Lyn has been stitching floss onto plastic canvases.  I believe she was introduced to this craft by an occupational therapist she had worked with for a while.  Lyn doesn't follow any patterns.  She just adds a color that strikes her fancy when she's used up a thread.

Here are some of the many coasters she's made me over the years. 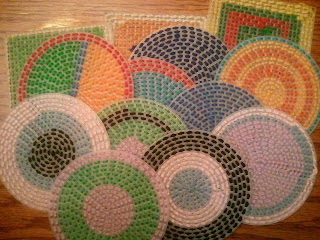 Lyn has never been able to start or end a thread, with or without a knot.  Mom has always been asked to do it for her.  Lyn could, however, thread the needle.  If you're not familiar with the needles used in this craft, they're much larger than a regular sewing needle and half of the needle's length is taken up by the opening for the thread of your choice.  Lyn uses two or three strands of floss.  The needles are large enough that you could easily use yarn.

Lyn has made countless coasters and several sets of placemats.  I once gave her a sphere form, but I don't think she's ever touched it.  She prefers the coaster circles and the large retangles for placemats.  She's working on a new set of four placemats for someone.  I'm not sure who will be the recipient.  Chances are good that she's not decided on that yet either.  It is not unusual for her to have several items in reserve that she can whip out and give to someone on a moment's notice.

Mom reports that Lyn is now unable to get the thread into the eye of the needle.  This is a new change of a skill she's been using weekly, frequently daily, for as long as she's been doing this craft.  More often than not now, she looks to Mom with pleading in her eyes but refuses to ask for help.  If Mom asks if she needs help, Lyn quickly passes her the thread and needle.  Earlier this week, she stated "The thread is too fat."  She's definitely trying to cover up her challenges.

Oh... Don't tell Lyn, but these babies can fly!  She'd be mad if she saw us playing with them.
Email Post
Labels: Changes