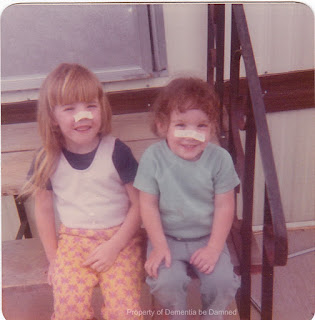 Mom found the Italy label in something and stuck it on Lyn.  I guess I wanted a label too.  Mine was done on masking tape.

Lyn was born in Italy in 1971 while our father was stationed there with the Army.  She was 6 weeks premature and weighed only a couple of pounds at birth.  Mom remembers using Men's handkerchiefs cut in half and folded down as her diapers. Lyn was deeply ill for the first three years of her life.  Mom had to keep Lyn in an upright position so she could just breathe when she slept.  There were times Mom sat in the rocking chair with Lyn in her lap all night so Lyn could breathe.  Her illnesses included pink-eye, chicken pox, bronchitis, pneumonia (3 times), German measles, asthma, and numerous upper respiratory infections.  Mom writes:

I believe she would have been a SIDS baby if I wasn't used to going in her room many times when
she "slept" because she would stop breathing.  A few times, I went in and found no movement or
sound.  Her lips and fingers were blue and she didn't gasp for breath when I grabbed her up.
Thankfully, we lived about 1 mile from the hospital.  I'd grab my purse and rush to the ER.   By that
time, she was coming around.  If she had nice color in her cheeks, like a normal child, I knew she
was running a high fever.

When our father's time in the Army ended, the family returned to NM where the Lyn's health improved dramatically.
Email Post
Labels: Memories