Mom took Lyn to bowling last week because her respite provider was on vacation.  When they arrived at the bowling alley, the athletes were told to keep their money.  Someone made a donation to cover the cost of the games for all the athletes for two weeks.  The gift was made the previous week which allowed the coach to have a thank you card for all the athletes to sign.
Mom asked if the donation was anonymous or could the donor be made known.  The coach said "See the bald man with the little boy in the red shirt?  He did it."  Mom recognized the gentleman because he and his son are frequently there when the athletes have their practice.
When the card was signed, Mom asked if she could take it to him because she wanted to thank him, one parent to another.  She and the gentleman had a great conversation.  She not only conveyed thanks for the unexpected donation, but also conveyed her gratitude for his kindness because too often people choose not to see the athletes or make fun of them.  It turned out that his sister has Downs syndrome.  He had watched the athletes bowl for several months and wanted to do something for them.
He recently approached the coach to ask if he could pay for the team's bowling.  She quickly accepted and let him know that the team has 24 athletes and the games cost each one $4 each week.  The cost didn't sway him and before he left that day, he had pre-paid enough games to cover the team for two weeks.
Only two games were played this week.  Lyn's scores were 98 and 129. 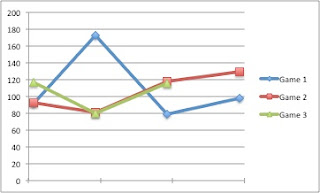