About a year the chocolate police were introduced to Lyn, she and Mom came to Virginia to visit.  We decided to go to the Purple Cow for lunch. 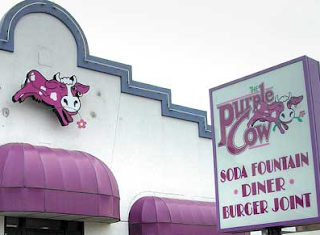 The Purple Cow was a 50's themed diner which was known for its very purple vanilla ice cream.  It was the kind of purple that kids thought was amazing.  Lyn  liked the Purple Cow because she liked purple and the food was darn tasty.

We were sitting there eating our lunches when three Virginia Beach sheriff officers sauntered in for their lunches.  Lyn's eyes went huge and she got very animated.  She quickly finished her bite and announced in her best stage whisper (nearly a yell, really), "Oh!  You have chocolate police, too!!!"

The officers, two of whom were African American, clearly heard as their heads snapped around and their eye brows went up into their high and tight cuts.  Mom told Lyn to finish her lunch quickly because we needed to go.  I did my best to not choke on my sandwich.  For the rest of the meal, the officers kept eyeing us.

We finished our lunches and I told them to go on out to the car while I settled the bill.  I waited until they were out the door before approaching the officers.  I explained that Lyn is a special needs individual who is convinced that officers in brown uniforms were there to enforce the law that milk must be consumed with chocolate.  Their expressions went from wary to confused to amused.  I told them of how Lyn came to believe that there was such a special division in the police department and that it was about the only way to get her to drink milk.

The officers relaxed and chuckled as one of them said "Thanks for clearing that up.  We thought she was being racist."
Email Post
Labels: Memories She makes me laugh