Recently, Mom and Lyn took a day trip out to Quarai.  Quarai is a sister ruin to Abo and Gran Quivira.  All three are now part of the Salinas Pueblo Missions National Monument.  The Spanish established mission churches in all three pueblos.  This particular mission served as the center for the Spanish Inquisition in New Mexico.  Dought and increasing pressure from the Apache eventually are what led to the pueblos being abandoned. 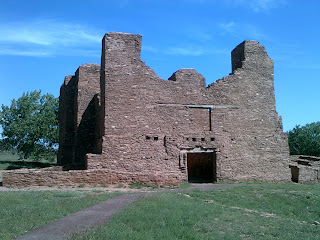 They toured the ruins, learned about the role the Spanish Inquisition had on the area and then settled in for a picnic lunch.  Lyn greatly enjoys little day trips like this because it allows them to be out doing something but still lets her get home before her discomfort sets as the day fades.  She doesn't admire the architecture or the massive red stone walls.  She doesn't particularly pay attention to the beautiful sky or the location.  She will pay close attention to any people they encounter along the way, including park rangers. 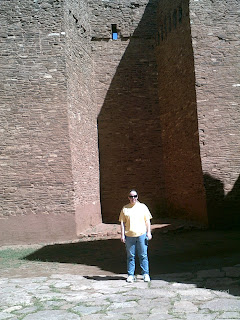 The first picture doesn't really convey just how massive those walls really are.  Here's Lyn on the path taking you through the ruined church itself.  Lyn reports that she had a very good day that day.
Email Post
Labels: A Good Day