Lyn is afraid of thunder.  She always has been.

When we were very young, we had a little black dog named Zeus.  You can see him here. 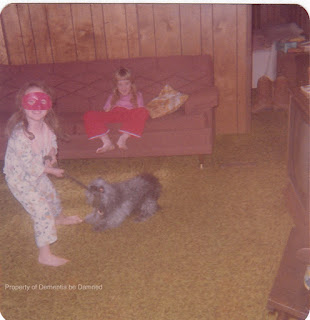 Zeus was a Peek-a-poo back in the days when designer dogs were really just pure breeds.  Zeus was a sweet little dog who loved to play with us.  He especially loved to play with balloons.  He would grab a balloon by the knot and shake his head for all he was worth.  The balloon would whap whap whap against his ears and he'd get so excited.  He would do the same thing with gloves.  This would send Lyn into peals of laughter.

Zeus was afraid of thunder too.  If there was a storm brewing, the first thunder clap would send him flying underneath Mom's bed.  A few seconds later, Lyn would come flying into Mom's arms.  It didn't matter the time of day or night, she'd be up and moving in a flash even if the rest of us slept through it.  Mom was a pretty light sleeper long before this because of the need to check on Lyn's breathing when she was little.  So, Mom would just lift the blankets and have them ready for Lyn to dive into.

Mom would then cuddle Lyn and try to talk her through the fear.  At some point, Mom described the sound of thunder as the sound that the angels make when they're bowling.  I can't even remember when that explanation came into play.  I just remember it always being part of our family's way of explaining things.  Even as kids, we had bowling toys or would set up our blocks and knock them down with balls. So, the concept of bowling was very familiar to Lyn well before she became a bowler.

Last week, the east canyon winds got very bad.  You could hear patio chair blow over, the flower pots by the front door blew over as well,  All this made Lyn nervous.  Despite the howl of the winds, Lyn eventually was able to fall asleep.  A short time after going to bed, maybe an hour, there were two claps of thunder.  Still, no rain.

She came stomping down the hall and was MAD.  Mom assured her it wouldn't last long and to just sit down with me and watch tv.  She did but was actually shaking.  After a few minutes with no more thunder, Mom suggested she go back to bed.  The Look was leveled in response.

After about 20 minutes Lyn said, "I think Grandpa was bowling with the angels and he made the 2 strikes."  Mom agreed and said he would probably be sorry he woke her up.  She told Lyn that their game was over.  So she got up and went back to bed.

Mom continues:
"I got to thinking how she explains the sound of the thunder.  Trying to have the sound relate to something familiar was important to her.  I remember the first time your oldest child was here during monsoon.  When the thunder started one night, she, of course, said it was grandpa and angels bowling.  LOL.  "Someone" tried to explain the scientific reason for thunder but was cut short.  Poor child really thought grandma had lost it!!!!  Your child's look told me that all the holes in my head were showing.
I realized how many times over the past 40 years, I have played games to help her get over things that frightened her.  Angels/grandpa bowling games; chocolate police - thoses were the best ones.
Yes, I'm going to Hell for lying."
Email Post
Labels: Memories She makes me laugh