When Lyn was 2 and a half months old, she began vomiting, projectile vomiting, each time I fed her.  Because she was so small, she was eating every 2-3 hrs.  I knew she would become dehydrated quickly.  She was 7 weeks premature and it wouldn't take much for that to happen.  Off we went to sick call.

The doctor checked her out and when he listened to her stomach he said she had gastritis.  He had the corpsman give her an injection and said it "might make her sleepy for a couple of hours."  She was knocked out for 48 hrs!

I was to give her jello water at each feeding  There was nothing like Pediolite in 1971 in Northern Italy.  Every 3 hours, I would try to wake her.  I had to rub and tap the bottom of her feet.  She struggled to open her eyes and drink.  She might have gotten 2 ounes down each time.

After the second day, the medicine wore off and she would wake normally.  That evening, she was wide awake and hungry.  First, I gave her some jello water to see what happened.  She gulped it down but of course wasn't satisfied after a few minutes.  I washed her bottles while your father was holding and talking to her.  I poured whole milk in one and set it to warm.  I had the camera in hand and snapped this picture just as she smiled. 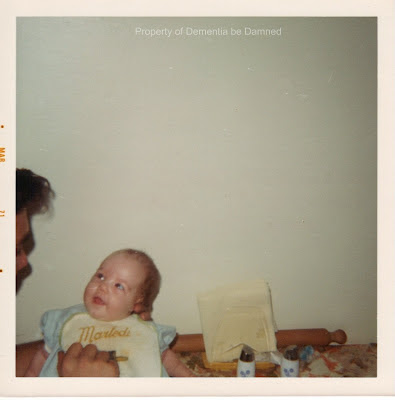 This was her first real smile that wasn't from gas.  She was looking straight at your father and smiled again.   Not only was this her first smile but the first wrong diagnosis to deal with.  She didn't have gastritis.  The formula was too rich for her and she couldn't tolerate it.  Whole milk was not too rich.

She drank the milk and kept it down with no vomiting.   She began to put on weight.  Usually a baby gains weight with formula.  Not her.  She gained weight with the cow's  milk.  Two weeks later, at her 3 month check up, the doctor saw she was up to 7lbs.  He asked about the vomiting and made a comment about her responding to the shot.  I kept quiet and knew I was doing the right thing for my child.  It wasn't long till I began to question and speak up.
Email Post
Labels: Memories Mom's Thoughts