In case I haven't made it clear in previous posts, Lyn's not shy.  She's such a social butterfly that she's totally comfortable walking up to a complete stranger to say something to them.  It is usually something nice.  Actually, I cannot think of a time when she's said something rude to someone she doesn't know.

Years ago, Lyn and Mom came out to my place for Christmas.  We took a day to walk around Colonial Williamsburg and enjoy the holiday decorations.  It is beautiful during the regular days and quite striking during the holidays.  They decorate using lots of natural items such as with garlands made of boxwood and magnolia with fruit for accents.  The actors create quite an ambiance that we enjoyed as we strolled from block to block through the day.

At one point, we were enjoying the antics of a rather fat squirrel who was clutching the tree trunk right at head height just chattering away at people.  He was rather bold and unafraid of us.  Lyn thought he was very funny until she spotted a flash of red.  That was it!  She was across the street in a shot.  She had spotted Santa. 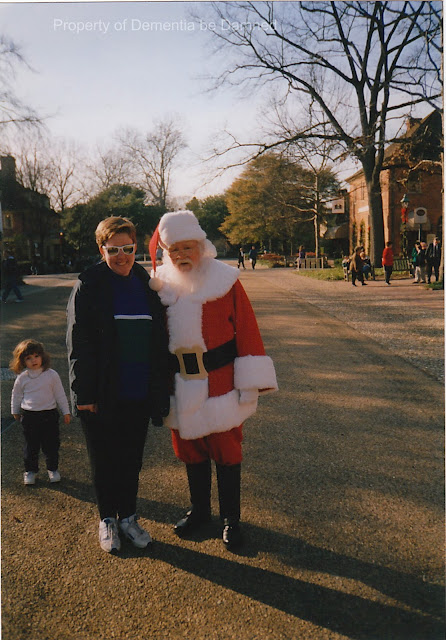 He was there to wish visitors well.  She excitedly told him about visiting us and wanted to make sure he knew how to find her on Christmas Eve.  He assured her he knew right where to go.  He wanted to make sure she was behaving herself and she promised she was.  They posed for pictures, of course.  She even got a hug before she'd let me tend to the little girl who had toddled up behind them.

Lyn was on top of the world.  It had been a good day to start with and seeing Santa had made it that much better.  To her mind, it was like he had been there just for her.
Email Post
Labels: A Good Day Memories She makes me laugh