Setting Up The Tree

There was no bowling on Thursday due to weather.  Lyn participated in the decision to not go out but ended up not being happy with the change in schedule.

Mom had turned on the noon news which was talking about how dangerous the winds were.  The news casters were comparing the speed of the Albuquerque winds to hurricane forces when the gusts were in excess of 80 mph.  She made some comment about the danger and Mom jumped on it.  She suggested they play it safe and stay home since there was so much dirt blowing, power was out in places and trees were coming down.  Lyn thought this was a good idea so no one got hurt.

Within 45 minutes, Lyn's face was long and she was very withdrawn.  Mom asked what was wrong and she just shook her head.  Mom tried to talk with her about the wind and that they made the best decision.  She said "I know."  Mom suggested that they think of something fun to do so she wouldn't be unhappy.  Mom got The Look.  Several ideas were met with "No, thanks."  In desperation, Mom threw out "I know it's early but we could put the tree up."  She liked that idea so they moved some furniture and brought the boxes of decorations in from the garage.  Mom uses an artificial tree and needed to organize the tree parts.  Lyn started grabbing branches.  When Mom asked her to wait so she could get all sizes together, Lyn decided she was no longer interested in helping.  Mom tried to get Lyn involved again and asked if she wanted to put them on the center pole.  She did but after a few minutes lost interest again.  Mom considered putting it all back in the garage but the project was too far underway.
After the tree was complete, Lyn sat alternating watching Mom and looking outside at the storm.  Mom suggested putting the lights and decorations on the tree.  Lyn put four ornaments on the tree and then announced she didn't like getting glitter on her hands.  The majority of the ornaments have glitter on them and Lyn was done, completely done this time.  She sat down in the rocker and just watched with a blank expression.  Mom's attempts to talk, even about their trip got no response from Lyn.
It was a tough day.  Fortunately, the winds died down the next day and Lyn was back on schedule.  Saturday, her respite provider took her bowling and she was thrilled.  She bowled three games and had one pretty good one. 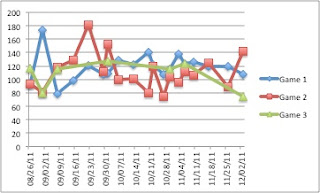